How to order Your Next drink in Spanish

HOW TO ORDER YOUR NEXT DRINK IN SPANISH

Spanish speakers love to celebrate any chance they get with a cold beer or a glass of wine. Drinks are a very important part of their culture, and ordering what you want, how you want it, can be a little bit tricky if you don’t know the basics.

Being able to confidently order a drink in public can be a better proof of your Spanish proficiency than any official exam. To pass this trial by fire, you’ll need to know, not only the vocabulary but also the unspoken cultural norms of the Spanish speaking country you are in. Unfortunately, most text books ignore this crucial side of the Spanish language or they even teach you the wrong way to do it. For example, some of you might know the phrase “Yo quisiera un refresco, por favor”, who says that in Spain? No one! This sentence is way too formal and stilted. Sorry for the spoiler.

Today is your lucky day! In this blog we are going to unravel the secrets of how to order a drink in Spanish like a native together with the most typical Spanish drinks to get in a bar.

Phrases for ordering a drink in Spanish

If ordering a drink in Spanish has you in a tizzy, take a deep breath and relax. We can assure you it is a thousand times easier than what your Spanish teacher would have you believe with all those formalities and tong twisters for ordering a simple drink at a bar.

Keep in mind that we are going to focus on the informal way (tú) used mainly in Spain while in Latin América they use the formal way (usted).

To begin with, the waiter might come up to you and star with conversation with:

As you can see, in Spanish there’s no time for formalities and they ask you straight away what you want to drink. The same applies when you are ordering your drink. Forget about the formal “Can I have a beer, please” English way of asking for something, in Spanish you can simply use the command to order your drink.

For example, when you’re ordering a drink at a bar the conversation could be:

Other useful phrases for ordering a drink in Spain are:

We know it sounds weird a bit too straight forward. However, that’s the local way of ordering a beer in Spanish. You’ll get the hang of it soon. Now that you know the basics, it’s time to get to know the drinks you could get at a bar.

Spanish speakers are beer lovers, therefore is essential for you to be able to order one without trouble. Unfortunately, ordering a beer in Spanish is a bit more complicated than just “Una cerveza, por favor”. The variation and challenges come in ordering your desired size and type.

1. Caña: the most common type of beer in Spain, it is simply a small glass of draft beer.
2. Doble: normally double the size of a caña, but it might vary depending on the bar.
3. Jarra/Pinta/Tanque: the name of this size of beer will depend on the region you’re in, but technically it is at least equal to a pint and generally the largest draft beer sold.
4. Clara: beer mixed with lemonade or fanta. It is very popular among Spaniards, especially during summer as it is refreshing and the perfect pre-lunch drink as it won’t leave you hazy.
5. Botellín: also known as quinto or tercio, depending on the size. Simply put, a bottled beer.
6. Cerveza sin: for those who don’t want to drink alcohol but still want to enjoy a cold beer in a terrace, this alcohol-free beer would be the solution. A “cerveza sin …” is simply a beer without alcohol. Remember to order the size you want from the above!

There’s a reason because Spanish wine is popular worldwide, and it is not less common in Spain or any other Spanish speaking countries. From fizzy cañas to full-bodied Riojas, wine is drunk all over the country. So, it is very important that you know the different ways to order a glass of wine in Spanish, you know what they say “when in Rome, do as the Romans do”.

1. Vino tinto: red wine. Keep in mind that f you don’t specify the preferred region of the wine you want, they’ll give you the house wine.
2. Vino blanco: white wine. Same happens here, it is important that you specify the region to avoid house wine.
3. Vino rosado: rosé wine. This type of wine is not very popular among Spanish speaking countries.
4. Chato: simply a small glass of wine of your choice.
5. Copa de vino: a standard glass of wine of your choice.
6. Botella de vino: a bottle of wine.
7. Cava: sparkling wine, similar to champagne.
8. Sidra: fermented alcoholic juice typically made from apples.
9. Vermut: this wine drink is typically taken before lunch, as its alcohol content is a bit lower than normal wine. It normally contains a variety of herbs and spices mixed with sugar.
10. Sangria: this popular Spanish drink might not be new for you, but it is always a treat. Red wine mixed with chopped fruit and juice, sweetener or sugar, and an alcoholic drink of choice (usually cognac or whiskey).

Everyone loves beer and wine, but sometimes you need something a bit stronger. Whether you’re ready to enjoy a nice drink after. Along day or pumping yourself up for a night out, it is important that you know how to order the perfect mixed drink at a bar.

When ordering a copa (mixed drink), it is important that you specify the brand of alcohol you want and the mixer. Some examples are:

Feeling a little bit cheeky on a night out? Having some shots might your best shout. When ordering a chupito at a bar you need to specify the type of alcohol you want, otherwise, you might get flavored vodka shots or even local drinks such as mistela or cazalla (we don’t recommend them). So, if you want a shot you just need to say:

Enough of alcoholic drinks, you could also order an innocent drink to quick start your day, enjoy a little snack or do some work in a coffee shop.

We have an entire blog of how to order coffee in Spanish like a local, so you should check it out if you want to be absolutely prepared to order a coffee without any trouble. Some examples are:

The coffee menu in Spain can be unnecessarily long and complicated and therefore a bit scary. But don’t worry, with our guide ordering a coffee in Spanish will be a piece of cake!

Regarding ordering a tea (té), you just need to specify the type of tea you want and if you need any sweetener or sugar with it. Easy peasy!

We could be speaking about drinks in Spanish the whole day, these Spaniards love having a drink with friends! Drinks are a very important part of their culture, so it will be useful to know some random drinks you could face on a drinks menu in Spanish. Better be safe than sorry!

1. Batido de …: literally a milkshake of your choice. Keep in mind that some milkshakes have proper names, such as a chocolate milkshake could be called “Cacaolaolat” or “Cholek”, depending on the region regardless of the brand. Crazy, huh?
2. Horchata: this traditional Valencian drink is a winner on a hot summer day. It is made from tiger nuts and its normally taken with “fartons”, which are confectionery sweets.
3. Rebujito: typical from the south of Spain, this refreshing drink is made with a special type of white wine, called “Manzanilla”, sprite and mint.
4. Calimocho: a favorite of both teenager and old ladies. This drink is literally cheap red wine mixed with Coca-cola. Sounds horrible, we know it, but you might change your mind after trying it.
5. Granizado: an icy beverage that could be made of fruit or have a neutral flavor and be served with fruit syrup, chocolate syrup or milk, depending on the country and region you order it.
6. Refrescos (soft drinks): it is as simple as saying the brand you want. For example, when ordering a Coca-cola, you just have to say, “Una Coca-cola”.
7. Agua: we can’t forget about water! Depending on the country and even the city you are in, it might be possible they give you tap water for free or that you have to pay for bottled water. Remember to specify the temperature of your water: fría (cold) or del tiempo (room temperature).

How to order Your Next drink in Spanish2020-02-012020-05-30https://www.happyhourspanish.com/wp-content/uploads/2012/10/happyhour1-e1350530184509.pngHappy Hour Spanishhttps://www.happyhourspanish.com/wp-content/uploads/2020/05/order-drink-in-spanish.jpeg200px200px
About
Happy Hour Spanish
Hayley & Maider are co-founders of Happy Hour Spanish, an online Spanish Program utilizing original video content and local meetups for a true Spanish immersion experience. Together they speak English, Spanish, French, and Italian and have a passion for teaching and learning languages. 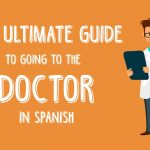 The Ultimate Spanish Guide for Going to the DoctorSpanish Vocabulary