Pamplona is the historical capital city of Navarre, in Spain. The city is worldwide famous for the San Fermín festival  and its most famous event: the “encierro” or the running of the bulls.

Practice your Spanish and enjoy a tour of the city of Pamplona.  Follow along with the Spanish subtitles to train your ear and use the Spanish to English translations below to improve your comprehension.

Pamplona is a Spanish city situated in the Community Foral de Navarra, in the northern of the Iberian Peninsula. It has a population of some one hundred ninety eight thousand (198,000) inhabitants and receives as much national as international tourism.

A visit to the historical center is sufficient to realize that it has an interesting heritage and monuments.
…

The parties most celebrated in Pamplona and known internationally are the Sanfermines, celebrated each year between the seventh (7) and the fourteenth (14) of July.  And because of this for the tourists it is especially interesting the (so) called “Route of the confinement” (the running of the bulls).

This is the route that they do running in front of the bulls each day between the 7th and 14th of July and is eight hundred forty nine (849) meters.  It begins at eight in the morning and lasts between some two or three minutes, when they arrive  at the plaza of the bulls.

There exist some “countdowns” that mark, from the moment in which the Sanfermines finish, how much remains for (until) the next (one).

Pamplona is furthermore the first city that the pilgrims pass through that do the Camino de Santiago via the Ruta de Roncesvalles. In the historical center are many the references to the Camino (the road) and it is easy to find pilgrims, happy to loose themselves in its streets. 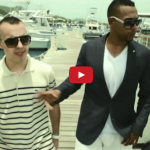