Running of the Bulls in Pamplona

Here at Happy Hour Spanish we are always trying to bring you some Spanish culture while you learn and practice your Spanish.  Lucky for you, Maider was in Pamplona for the running of the bulls and recorded the exciting race for our cultural Spanish vodcast.

Watch the video (in 100% Spanish) and use the Spanish subtitles to train your ear. Then follow along with the Spanish-to-English translation below to check for any vocabulary you didn’t understand. Make sure to watch it a second time to see your improvement! We hope you enjoy learning Spanish from a safe distance with the bulls in Pamplona!

Want to learn more about Pamplona?  Check out this short Spanish vodcast about this interesting city in Spain.

We are in Pamplona in this celebration so popular and so international in Navarra, in the north of Spain and we are going to see a closed running [the running of the bulls], which is this street of the bulls and the people running infront

So … we are in the balcony, in the street Santo Domingo and normally these balconies they can cost like minimum some 50 (fifty) euros and are rented

The truth is that we are in a privileged place because it is not so easy to see the running from a balcony such that … well, we are going to be only like a few seconds the race here below and you can see that almost everybody is dress in the typical suite which is: white pants, a white shirt and of course the red bandana, from the parties from the patron saint of the city, San Fermín.

The bull runnings of San Fermines start at 8 o’clock in the morning and before the race everybody sings the song that we are not going to be able to here from the balcony but which says, well:

“To San Fermín we ask, for being our leader, guide us in the running, giving us his blessing”

Some take the race with humor and while stretching their muscles and preparing for the run during some minutes before the bulls.  There are some even dressing, for example, as the hulk.

Well, now yes, just a few minutes remain, the street is already quite unobstructed only with the runners that are going to run the “running of the bulls”.  In the balconies now everybody is ready

The curious thing is that looking at the people who will be running, we [would] say that 99% (ninety nine percent) of the runners and is not by something that is predetermined, men. So that it almost calls attention to see the women, but good. Let’s see how the street is, already prepared for the next running.
…

The truth is that to see the race, the running from the balcony is something like three very very exciting seconds because you can see live how the bulls run, but clearly, obviously it’s not like on television [where] you can get to see the race track during the two minutes, three minutes that it lasts.
…

When you are on the balcony it is a few seconds but really, with chicken skin [goosebumps]. 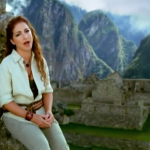 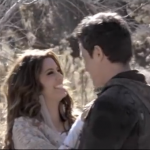