Spanish is spoken in more than 25 countries and by more than 450 million people.  While speakers from all countries can understand each other, differences exist between the language.

Today we will travel to the spanish-speaking country of Argentina where they use something known as ‘voseo‘. Perhaps you’ve heard of that vos thing before. Don’t panic, it’s not as complicated as you may think …

Let’s start with what voseo is NOT.  Voseo is NOT the same thing as vosotros.  Vosotros is the commonly used pronoun in Spain referring to the familiar 2nd person plural (as in ‘you all’).

Voseo is a substitute for 2nd person singular pronoun, in place of the more commonly used tú. That’s it.  Instead of tú, use ‘vos’.

PERSONAL PRONOUNS (I, you, he, she) 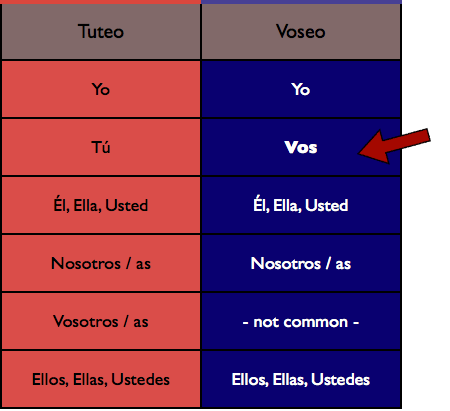 So far so good, right?

It gets even easier.

In most cases, changing vos for tú doesn’t mean changing the conjugation of the verb. You simply replace the preceding pronoun with vos. 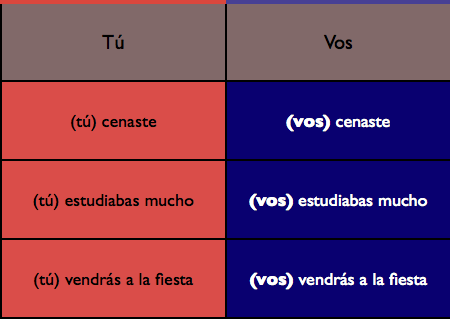 And as you probably know, in Spanish it is not required to use the personal pronoun before the conjugated verb. So, in many cases tuteo and voseo appear exactly the same (i.e. to just say ‘cenaste’ works in both cases).

This is true with just two exceptions, which we will discuss in more detail later.

Where did voseo come from?

Voseo has been said to date back to roman times, originally used as a formal way of addressing someone (very similar to the French ‘vous’, for any of you polyglot french speakers).

Over time, Usted became the formal means of communicating to someone, so in some regions vos was adopted as a replacement for the tú form.

Where is it used?

The map below gives you a better idea of where voseo is predominantly used and to what extent. 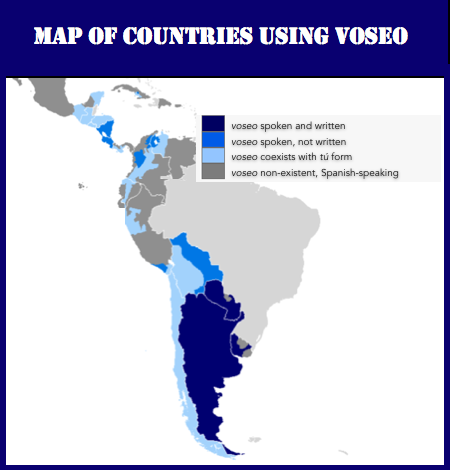 In most cases there is no difference in the verb conjugation between tuteo or voseo. However, as we mentioned earlier there are two exceptions:

Let’s look at each of these in turn:

The voseo conjugation in the present tense is slightly different than that of tuteo.  Can you identify the differences looking at the table below? 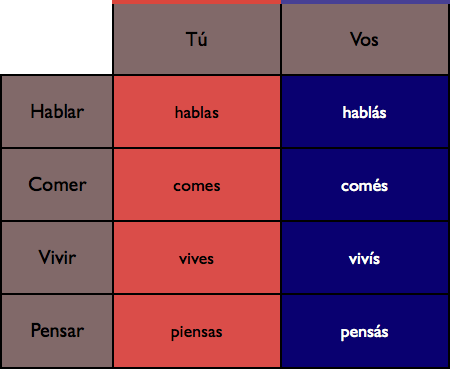 Thus, to conjugate a verb in voseo, simply remove the infinitive ending and add the following endings (without changing the stem):

For example:
PEDIR (tuteo): tú pides = irregular stem change e –> i
PEDIR (voseo): vos pedís = no stem change, i instead of e in the ending

In voseo present tense there are only three irregulars.

These verbs are also irregular in tuteo. 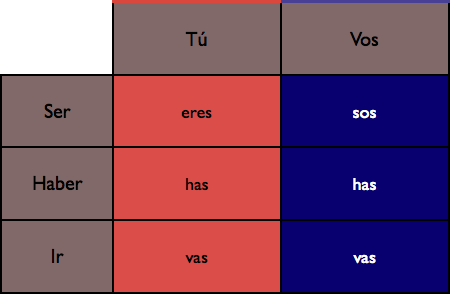 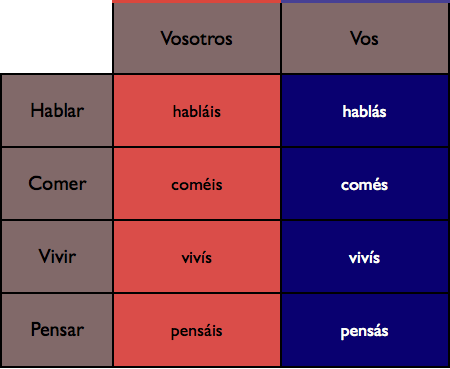 2. Voseo in the Imperative

What about the imperative?

Can you identify the difference between the imperative tú and vos based on the table below? 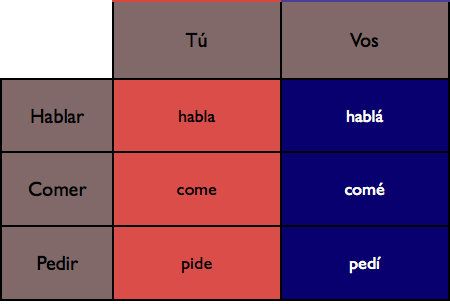 Remember the imperative tú is derived from / equal to the 3rd person singular (¡tú habla!). To derive the voseo from the tuteo we see the same changes we saw as in the present tense:

To conjugate voseo in the imperative (without relating it to the tuteo form), simply remove the ‘r’ from the infinitive ending and add an accent to the final vowel. 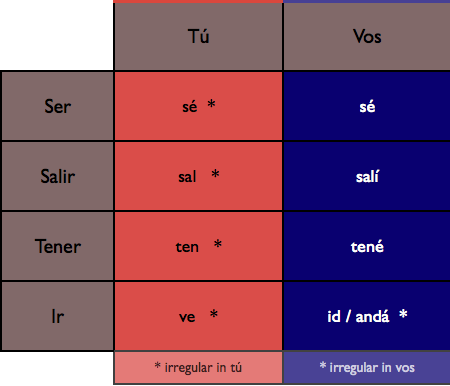 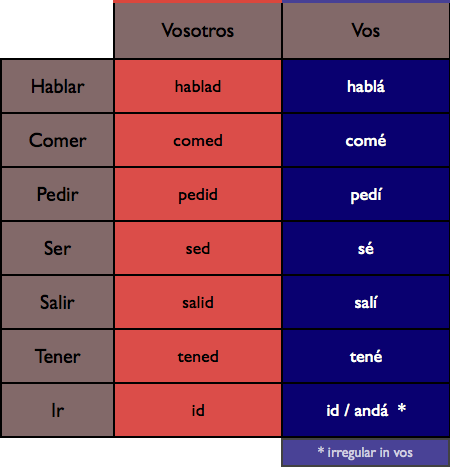 In summary, voseo is very similar to tuteo and vosotros forms. In the table below you can see how the voseo conjugation can be derived from either tú or vosotros forms in the present tense and the imperative: 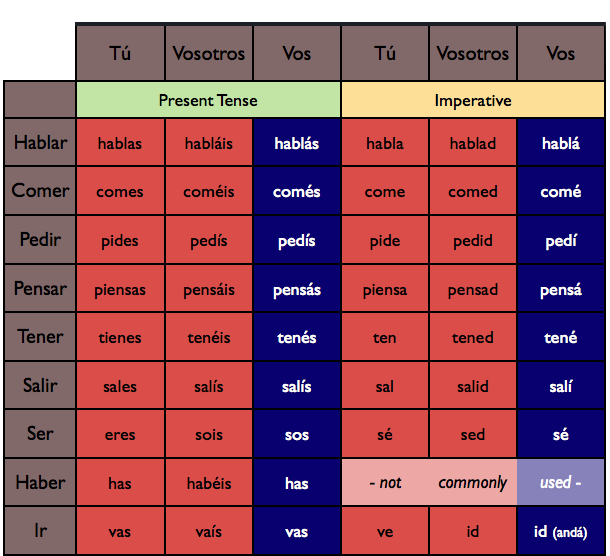 In voseo, in addition to changing in personal pronoun from tú to vos, you must also change in the prepositional pronoun ‘ti‘ to ‘vos’.  See the table below:

Tuteo & Voseo Prepositional Pronouns (me / you)

Note that while voseo uses vos for the personal and prepositional pronouns, it does NOT do so for the object pronouns nor the possessive pronouns.  These remain the same in tuteo and voseo. 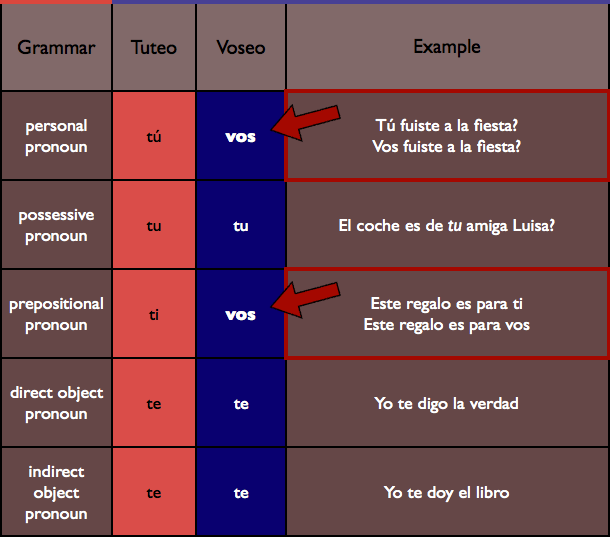 So that’s vos.  Again, while it is interesting to know, don’t worry about having to learn it.  All Spanish speakers will understand you if you use tú, even in Argentina.

Do you have any experience using voseo?  Share with us in the comments.  If you found this article helpful or interesting, please consider sharing it 🙂

ARE YOU LEARNING SPANISH?

GET YOUR FREE SPANISH PHRASEBOOK!

Filled with 500+ Spanish phrases native speakers use every day 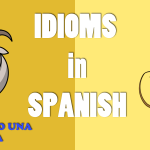 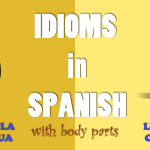