6 Suffixes in Spanish to Multiply Your Vocabulary

6 Suffixes in Spanish to Multiply Your Vocabulary

Just like in English, Spanish makes use of many suffixes to change the meaning of words. Sometimes suffixes take objects and modify them to people and places and sometimes they can change the type of speech, making an adjective an adverb, for example.

Many of the suffixes draw on basic vocabulary words that early learners might recognize to create more complex words. Knowing those vocabulary words and knowing the general meaning that the most common suffixes have can help learners deduct the meaning of new words, even if they’ve never heard of them before.

We’ve talked about the most common suffix in Spanish, “ito” and its variations, in our post about diminutives. Diminutives work really well in informal speech and they’re a great way to play with vocabulary because they can be applied to just about any word.
The suffixes in this list work a little differently than diminutives, though, because unlike diminutives, which are mostly informal, these suffixes fit just as easily into formal conversation as they do informal conversation. You can think of them as entirely separate vocabulary words with entirely different meanings because oftentimes, they are.

Our first suffix is “-ero/a.” There are a few different ways to use it:
It is most commonly added to a noun to create an occupation. For example, you can take a noun like “pan” (bread) and add the suffix “-ero” to create the word “panadero” to refer to a baker. Other examples of this use are as follows.

You can also use this suffix to refer to a tree that grows fruit:
limon (lemon) -> limonero = lemon tree
coco (coconut) -> cocotero = coconut tree

Or to refer to a space where something is stored:
azucar (sugar) -> azucarero = sugar bowl
moneda (money) -> monedero = wallet/coin purse

The second suffix on our list is one that you might already recognize. It appears often in the name of restaurants or stores. When added onto a word, it takes an object noun and makes it into a place. Usually the place is where the object is sold or made. Here are a few ways to use –ía:
Again, we’ll look at the example of “pan” (bread). Like with -ero/a, you must slightly modify the word to make the suffix fit, but with the suffix, “pan” becomes “panadería” or bakery.
The same can apply with “verdura” (vegetable). It is changed to “verdulería” to become a vegetable stand.
Some other examples:

This suffix is another incredibly common one and it’s also a really easy one to pick up. That’s because it can almost always be translated as “-ist” (look familiar?).
Here’s a few examples.

In addition to more every day occupations, “ista” is also used to imply membership to a group or subscription to an ideology. It can be slapped onto the end of just about any political name or group to show belonging. For example:

There are a few exceptions to this rule, but when in doubt, remember that -ista usually refers to an occupation or something that someone is. One notable exception is from the word “futbol” (football, soccer), which becomes “futbolista,” meaning “footballer” or “soccer player.”

The suffix “-dor” is the most dynamic one on our list – it can be used in many different ways, but what all of the different uses have in common is that they are a noun derived from a verb. If you know the verb, then you know that a noun ending in “-dor” is a noun that performs the action of the verb or it is somewhere where that action is performed.
Some examples of words that turn a verb into a noun that does the action that a verb describes:

Some examples of words that turn a verb into a noun that describes the place where the action of a verb is carried out:
Probar (to try) -> probador (fitting room)
Comer (to eat) -> comedor (cafeteria)

This suffix works almost the same way that the English suffix “-ly” can be applied to adjectives to make them adverbs. You can add “-mente” to just about any adjective to make it an adverb. It’s important to note in the formation of these words, if the adjective has a feminine form, then the feminine form is paired with the suffix.

With this suffix, you’ll really start to multiply meanings. Like “-dor/a,” it is paired with verbs, but instead of creating a noun, it actually can create a noun and an adjective. The noun is usually an object or person carrying out the action of the verb and the adjective implies that the person or thing it is describing has the quality that it denotes.
Here are some examples. We’ll list the noun first, then the adjective in our translations.

With just these six suffixes, you can take familiar words, like “pan” or “comer” to the next level and create whole new words. And, when you encounter words that use these endings, you’ll be all the more ready to take a guess at their meaning.

6 Suffixes in Spanish to Multiply Your Vocabulary2019-08-012020-09-22https://www.happyhourspanish.com/wp-content/uploads/2012/10/happyhour1-e1350530184509.pngHappy Hour Spanishhttps://www.happyhourspanish.com/wp-content/uploads/2019/07/suffixes-in-spanish.jpeg200px200px
About
Happy Hour Spanish
Hayley & Maider are co-founders of Happy Hour Spanish, an online Spanish Program utilizing original video content and local meetups for a true Spanish immersion experience. Together they speak English, Spanish, French, and Italian and have a passion for teaching and learning languages. 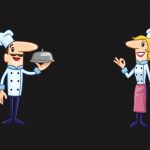 Restaurant Spanish: The Only Phrases You Need to KnowPractical Spanish, Spanish Lessons 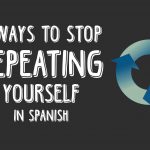 6 Ways to Stop Repeating Yourself in SpanishSpanish Lessons, Spanish Vocabulary